Difference between revisions of "Beginner's Guide"

Note: This guide is for gameplay only. For installing, refer to Installing Millénaire or FAQ Installation.

Watch this video on how to play http://www.youtube.com/watch?v=Z5QMhFg0W8I

This page is currently a work in progress. Anyone who feels they can fill in any of the below sections in an informative manner, please feel free to do so. It is available both on the Millénaire Wiki at http://millenaire.org/wiki/Beginner%27s_Guide and as a PDF included with the mod itself.

When you begin, remember, your first priority is to find a village and collect resources. Which type of village you want to help is completely up to you. When you find a village that you like, start trading with them to try to gain reputation and deniers (the currency. Also, if you get any quests from them, do it! It will increase your reputation and give you xp. Once you get enough reputation and deniers, try to buy a house from the villagers and they will build it for you. You are now on your way!

If you really want to cheat, you can break the villagers' locked chests and replace them with normal ones. This allows you to sell stuff, then collect it right back.

Millénaire is a Minecraft mod designed to add some new villages, lone structures, items, blocks, and NPCs to the game. These items are mainly based off of loose 11th century cultures from around the world. Five different villager Cultures are included in this mod, each with their own items, buildings, and overall style. If you ever want more from the mod, additional player-created content is available from the library , and if you need assistance several guides are provided to help players with further customization.

An overview of Millénaire is available here, and a list of all categories of content on this wiki can be found here.

A message will confirm that Millénaire is properly installed when you load a world in Minecraft. To locate nearby villages, press the V button.

If there is no village nearby, the encouraging message, "No known village within 2km. Keep searching!" will be displayed. It is recommended that you journey in a single direction until a new village is located. Villages only appear in newly generated chunks (an area of land in Minecraft) and the distance you will have to travel to uncover a new chunk depends on your chosen render distance (changeable in Minecraft's Options menu). 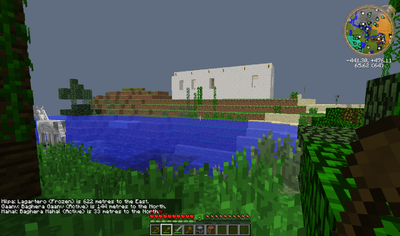 Five pieces of information are displayed with the V command:

For example, in the image to the right:

In this example Milpa, Gaanv, and Mahal are culture specific village types. The village name will also tell you if it is a hamlet, which is a small village type connected to a larger village nearby.

Once you have discovered more than four villages, only the four closest to you will be shown by the V command.

A village begins with a number of different buildings inhabited by villagers who each have a different job. The male villagers perform roles such as farming, mining, crafting, etc. The female villagers carry out several tasks including transporting goods around the village and carrying out trading activities.

Each village contains a central building which acts as a Town Hall and which is inhabited by the village leader. Inside or outside of this building will be a number of signs which provide useful information about the village, such as its current population or the required resources necessary for an ongoing construction. Right clicking on a sign gives more detailed information.

Several of the village buildings act as shops, that trade only a few items specific to that building's purpose. The central building/town hall acts as the main shop for the village, trading a variety of items. Entering a shop during the day will prompt a seller to approach the player and begin a trading session. 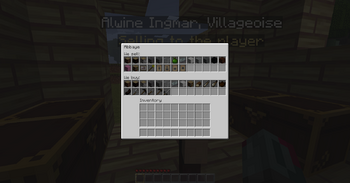 The trading screen, this lets you sell items to the village or buy items from them.

Right clicking a seller opens the trade window. The top bar represents what the village offers for sale, the central bar represents what the villagers are interested in buying, and the bottom section shows your own inventory. Dark items are out of stock, brightened items are in stock. Left clicking on a brightened item in either the selling or buying bars performs a trade of that item. Hold down left-shift and click to sell or buy eight items at a time or left-ctrl and click to sell sixty-four at a time. Also in newer versions you can give away items instead of selling giving you more reputation but no money. You can give away items by opening trade and pressing the flower right beside your inventory

The currency used for trading in Millénaire is the Denier. Note that a shop can only sell items which either you or the villagers have provided to it - a brand new village is unlikely to have anything to sell yet.

Different villages will trade in different items, and Millénaire adds several new items to Minecraft, many of which are only available through villages of a particular culture. A full list of these new items is available here. Some rare items will not be available for sale until you have built a good reputation with the village.

NOTE: The same materials cost more to buy than to sell, so you cannot simply use the villagers chests as a storage system, with the exception of stone in Norman villages which costs 2 deniers and can be sold for 3 deniers. 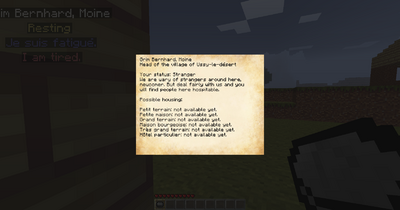 Right clicking on the village leader opens a series of pages containing useful pieces of information.

The village leader inhabits the central building, and can be found standing inside or outside the building at all times, except in the early morning when he will be busy patrolling for and slaying hostile mobs.

Once you have earned enough reputation, the village leader will offer you opportunities to:

There is a page detailing reputation levels on this wiki, but this might be considered a spoiler by some players. The page is located here.

You play an active role in the growth of villages. Villagers farm, craft and collect some of their own resources, but rely on you to provide them with other items. Villagers use their resources to upgrade and expand their village.

Selling commonly found resources (such as wood or cobblestone) to the villagers enables them to upgrade their village much faster than they could on their own. While exploring and mining you likely collect many more of these common resources than you need, and now you have something useful to do with them! 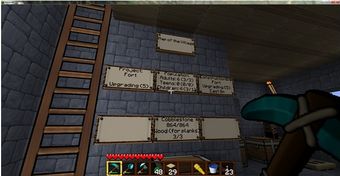 Your Villagers will tell you what is needed and how much is needed for their project.

The signs inside, or just outside, the central building in a village display simple information about the village, and right clicking a sign provides more detailed information.

Once the village has all of the resources needed for a project, a builder will collect them and head to the construction site. When construction starts you can check the village map to see the location of the construction, and you can also go and watch the builders working. You should check with the village on a regular basis to ensure that their projects are properly supplied. It is an ongoing process and you need to be on your toes!

You might find that the signs report that the village lacks space. You can clear space for village expansion by checking the village map for territory that is currently unsuitable for building. You can then level this unsuitable land. You might not need to take it all the way down (or up) to the same level as the village - the village map will update as you level the area, so check this to see if you have done enough.

Village growth is a slow process but watching buildings being built and upgraded is very rewarding, particularly when the villagers are working on a building you have designed yourself! Just keep on top of it and you will have a great village in no time at all.

Each culture has a collection of unique tools and weapons. You cannot craft these items yourself, but you can buy them from the villagers. Some villages (especially military villages) may contain a Forge and/or an Armory, and given the right resources a village blacksmith or armorer will craft these tools to trade with you.

Merchant villagers travel between villages which have an inn, importing and exporting goods to the village's town hall.

Some villages will construct a market when they become sufficiently advanced. When the market construction is completed foreign merchants will begin to visit. There are seven different types of foreign merchant, and some trade in rare goods. In particular, the Viking Merchant sells powerful amulets which are not available anywhere else.

Note that foreign merchants only sell goods, and will not buy any from you.

Quests are available nearly all the time, and range in work required and reward given. Generally, you will need a certain level of reputation in order to be trusted with a quest.

There are two main types of quest:

A series of guides on building custom buildings, villages and cultures are provided on the wiki. The series follows a logical order: