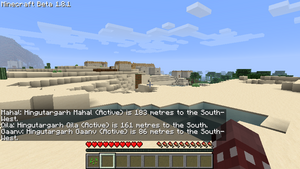 Independent villages start small, always surrounding a central building (of varying type: fort, palace, monastery, etc., generally referred to as the "Townhall"), with a few houses or other buildings. They will however expand as the villagers build additional structures and improve existing ones. To do this the villagers need resources, the same that would be needed for the player to make the buildings in question. Villagers will gather some of those resources themselves (for example, they have lumbermen that will gather wood from trees, and some have miners that gather cobblestone, sand and sandstone) and depend on the player for others. Newly-built houses start empty, but adult villagers from existing houses will have children that will grow up and move in the new houses. The population of the village will thus slowly grow until all the houses are filled. 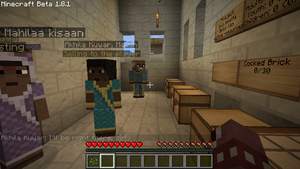 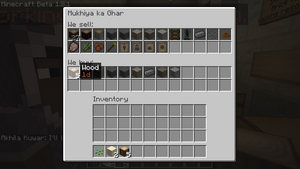 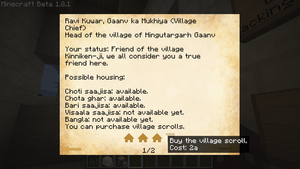 Note that while you reputation is mostly village-specific, you also have a culture-wide reputation that influence

Villages produce some goods that are specific to their culture. This includes crops and food items (like maize for the Mayans, curries for the Indians...), tools (Norman only) and specific blocks and decorative elements. Culture-specific crops cannot be grown by you and you cannot make the tools and custom blocks (except Hindi bricks); you must trade for them with the villages. The custom blocks are generally crafted by specialised villagers. Before you have access to them, and before the village can create buildings that requires them, it must build a house for the required crasftmen, and a boy and a girl must move in to take up the jobs. This can take time.

You can choose to fight villagers instead of helping them. If you manage to kill all the adult males of a village, all the village chests will automatically unlock and you will be able to take their resources. Be careful though, attacking one villager will cause all the others to fight you. Also, your reputation will suffer, not just with the village you target but with all the other villages of the same culture. Note if you kill all the villagers, they will be dead permanently. If you don't kill all of them or they get killed by some by other means (from falls, fire...) they will respawn.

Millénaire's original culture, the Normans are also the biggest in term of content. They are based on 11th-century Norman villages on the coast of France, and speak French. They have villages centered on forts, manors, abbeys and guild houses. They produce different food, like bread, cider, calva, boudin and tripes. Their most useful speciality however is probably their excellent Norman tools available from the forge, the Norman broadsword and the Norman armour from the armoury.

Their advanced buildings are often built of timber frame, a block made by a carpenter. Finally, their villages can build a market, where foreign merchants will sell rare goods, such as the Viking Merchant's amulets.

The second culture added to Millénaire, the Indians are based on rice-growing villages from the Ganges valley and speak Hindi. Their villages are centred on Palaces, Forts and Chief's Houses. Their rich cooking is based on growing rice, turmeric, sugar canes and raising chickens, from which the player can make vegetarian and chicken curries.

They build mostly from mud bricks and cooked bricks, special blocks produced in a kiln. 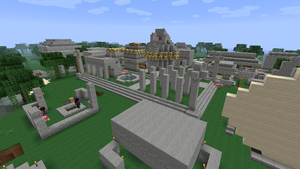 The Mayan observatory at the centre of a religious village

The third culture added to Millénaire, the Mayans were designed by MinerMiah. They live in military, agricultural or religious villages and build massive stone and cobblestone structures. They can farm maize, from which they make Mayan food: Masa (Maize tortillas) and Wah (a tortilla wrapped on chicken meat). They also craft great Mayan carvings and ornamental gold blocks with which to decorate their palaces and temples. 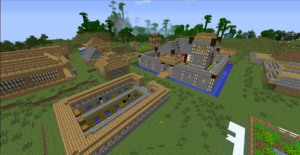 A fully upgraded Japanese fort in a military village

The fourth Culture to be added to Millénaire. They live in - like the Mayans - military, agricultural or religious villages. They build very detailed and stunning buildings out of paper walls and Timber frames. They farm rice to make the food Udon and farm Wheat to make thatch. They also have very good weapons such as the tachi sword, and two different armour sets.

In addition to full villages, you will encounter independent buildings in the middle of nowhere. Some are populated by one or a few villagers, with which you can generally trade some limited items (for example, lone lumbermen in the forest will buy axes from you and sell you wood and cider), other are empty. You can look for items in empty buildings. Seek out hidden chests! Also beware, as some lone buildings are occupied by hostile characters that will attack you on sight. Kill them to loot them. This will not affect your reputation with their culture, as they are outlaws. 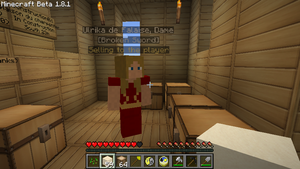 A Norman Lady with a quest to offer

Quests are extra tasks you can perform for villagers. When a quest is available, it will show above a villager's head within square brackets. Right-click on him or her for a description of the quest and the possibility of accepting or refusing it. Regular quests will reward you with money, reputation or items. Some quests require you to have a good reputation with the village in order to be available.

To know what quests you have accepted and need to complete, press 'M'. 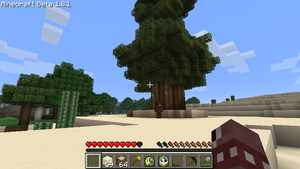 The Sadhu underneath his tree

Expanding on the quest concept is the Creation Quest: a series of quests with different tasks to perform (not simply carrying objects around) and a scenario revolving around exploring why the Minecraft world exists and what the Millénaire villagers are doing in it. The quest is divided in chapters. To start it, get a reputation of "one of us" in an Indian village, and one of the villagers will soon give you the introduction quest. You will have to search for the Sadhu, an Hindu wise man living under a tree in the forest.

Locating the sadhu requires travelling to a forest (not a taiga) that was not generated previously. This might require quite a lot of exploration if you had already travelled in your world extensively. A good solution can be to use a mapping tool to check how far you had explored, and to head in an area you know has not been visited before.

Completing the Sadhu chapter will grant you leadership status for Indian villages. 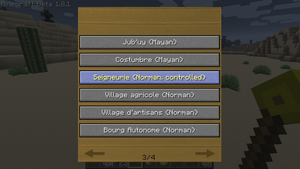 In order to generate villages yourself in a location of your choosing, you first need a Summoning Wand. It can be bought in any village. When you have a wand, right-click on an obsidian block to generate a new village of a random type around you, or right-click on a gold block to be able to chose what type of village you wish. Be careful, villages can spawn on top of you, so you may end up stuck in the ground and start suffocating under a building. Be prepared to dig yourself out. Ordinary village types generated with the wand behave exactly as randomly-generated ones; you do not control them in any way.

All cultures have a specific village type, known as the "controlled village". In order to be able to generate one, you need to be recognised as a leader of the culture in question. There are two solutions for that:

Once you have that rank, the controlled village for that culture will appear in the list of possible villages when using the wand on a gold block. 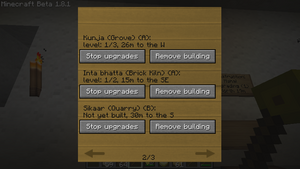 The project screen in a controlled village

In controlled villages, you decide of the construction of all the new buildings. For this, you need to use the wand outside the village at the spot where you want a building to be placed. You will be presented a list of available buildings, and if there is enough space for it, its creation will be ordered. Villagers will however still need to build the buildings you want the normal way, and they will require all the resources needed. In addition, you can see a full list of building projects in the Town Hall by right-clicking the projects panel. In that interface, you can chose to allow or forbid upgrading each building. You can also have the village forget any building project that is not inhabited. If the building already exists, it will not disappear on the ground, but the village will no longer consider it as belonging to the village and you can destroy it without consequence.

All chests in a controlled village are unlocked, so you can put and take resources as you want.

Millénaire is very customisable, allowing players to add new buildings, villagers, village types or even entire new cultures. The main source for such player-created content is the new Millénaire Library. Custom content is typically installed in the millenaire-custom directory, which is left untouched when upgrading Millénaire using the installer.

It is possible to create buildings in-game in the regular Minecraft way, including in Creative Mode, and then export them as building plans usable by Millénaire. To know more, check the dedicated guide.

Working with the Millénaire files[edit]

Other modifications (new village types, quests, cultures...) require direct edition of the Millénaire files. You can see more informations for some in the. Many aspects are not documented, the best is to look at how the existing ones work.